The Green Camp Gallery is about food security, care of the environment and grassroots action to counteract the increasing power and influence of biotech and GMO companies such as Monsanto, DuPont and Bayer. In the context of the World Food Day this past weekend has been a busy one for ACTivism in Durban, with three days of talks and events held by the various social and environmental groups around the city. We, therefore, decided to devote this week’s content to the happenings and event of the past weekend.

On Friday there was a press conference organised by the KZN Environmental Network (KEN), whose member groups include South Durban Community Environmental Alliance (SDCEA), groundWork (Friends of the Earth South Africa), Earthlife Africa Durban, Timberwatch, Biowatch, SAFCEI, and Greenpeace among other groups.

The main purpose of the network is to focus on the myriad environmental issues that connect us all and provide present community perspectives around water and sanitation, energy, food, land and waste.

This was followed by a ‘People’s Assembly’ on Saturday at the Durban University of Technology, named "Seeds of Our Struggle." Affected communities of Durban and KZN gave testimonies as to the ongoing struggles they face on a daily basis, namely climate change, air quality, health, energy, livelihoods, development and food production etc.

Definition:A popular assembly (or people's assembly) is a gathering called to address issues of importance to participants. Assemblies tend to be freely open to participation and operate by direct democracy, and to form an alternative power structure when participants feel the effects of a democratic deficit in a representative democratic systems.

Discussions focussed around solutions and fresh ways to combine and realign forces against an economic system that puts corporate profits before people and planet.

A Day of Solutions concluded the weekend at Chatsworth’s Nelson Mandela Youth Centre, in celebration of the Global World Food Day and to mark the end of the ‘Monsanto Tribunal’.

The three-day symbolic "moral trial" was arranged by an international coalition of rights and environmental groups and includes people's assemblies in The Hague and around the globe.

US seed developer and biotech company Monsanto is facing charges related to "ecocide" in a symbolic trial being staged by anti-GM food activists in The Hague. The tribunal comes as Monsanto edges closer to a $66 billion deal with German chemical giant Bayer, to form the largest GMO and pesticide company in the world, dubbed a merger from hell.

The trial also coincides with the release of a scathing new report which claims that it's not just Monsanto's products that have been harmful, but also that the biotech giant's political influence and lobbying efforts have contributed to a global erosion of democracy, environmental chaos and social injustice.

"This tribunal might not be legally binding, but it will highlight the urgent need for similar legal mechanisms to hold corporations accountable for the damage they cause in the pursuit of profit," said ‘Global Justice Now’ food campaigner Heidi Chow in a statement.

The Monsanto Tribunal will hold Monsanto & Co. accountable for their crimes against humanity, human rights violations and ecocide, no matter what name and form they morph into. 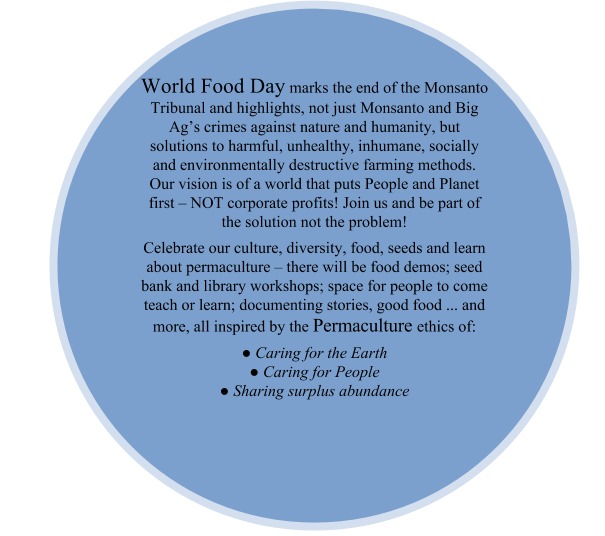 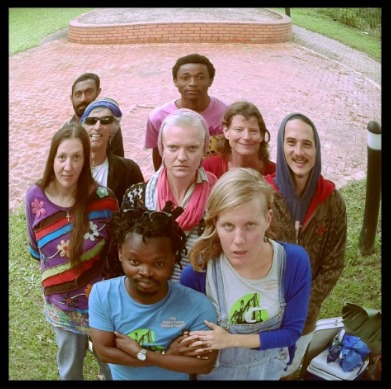 "This event evolved to become a networking gathering for people passionate about food security and social justice. There were demos with some lively discussions around how to induce the Youth Centre into a Permaculture hub, identifying the root causes of food inequality, and visioning around increasing food security in Durban /South Africa, all while presenting some solutions and celebrating each other.

We enjoyed the sun and the rain, had a tree-mendous meditation session, chatted about seeds and seedbanks and circular economies, saw the proof-of-concept for the juicycle, learned some tricks around making banana jam, shared some ingredients on non-toxic body products and a wonderful picnic in the amphitheatre.

The Food for Life crew dropped by on their rounds with some of their yummy vegan food, to go with the cassava and beans and stew. Thanks to all those that made the journey, it was a great day. To those that wished to be involved but couldn't make it, let’s make another one in the future."